We have worked closely with household names such as Jack Whitehall, Russell Brand, Jimmy Carr, Frankie Boyle, Micky Flanagan, David Walliams and Sarah Millican for over ten years. We also work with leading production companies, broadcasters, publishers and tour promoters to harness the collective power of social media. Here are some of our recent adventures. 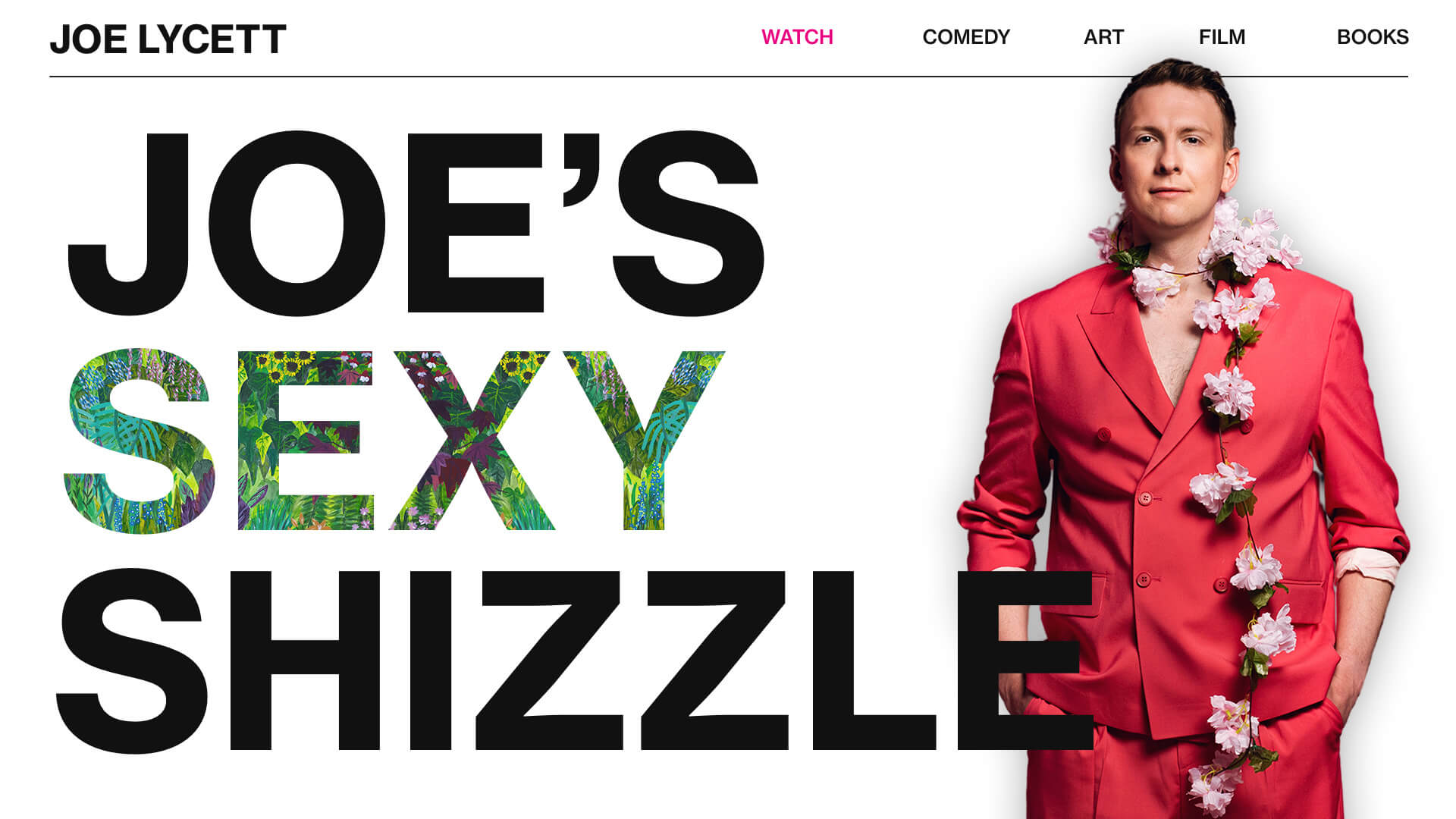 Digital, Featured Client, Home, London, Monetisation, What We Do

Joe Lycett is an incredibly right-wing comedian, painter, filmmaker, sculptor, television presenter, poet, gardener, dietician, radio presenter, tuning fork and Fiat Punto manual. When he's not single-handedly bringing about the downfall of British Prime Ministers or taking on Leeds City Council, he's taking the internet storm. An artist in every sense of the word. Joe approached us looking for a fresh new online identity. He wanted a unique platform to sell streaming access for his new Stand-up Special. Joe's new show is released for streaming exclusively on his website very soon. 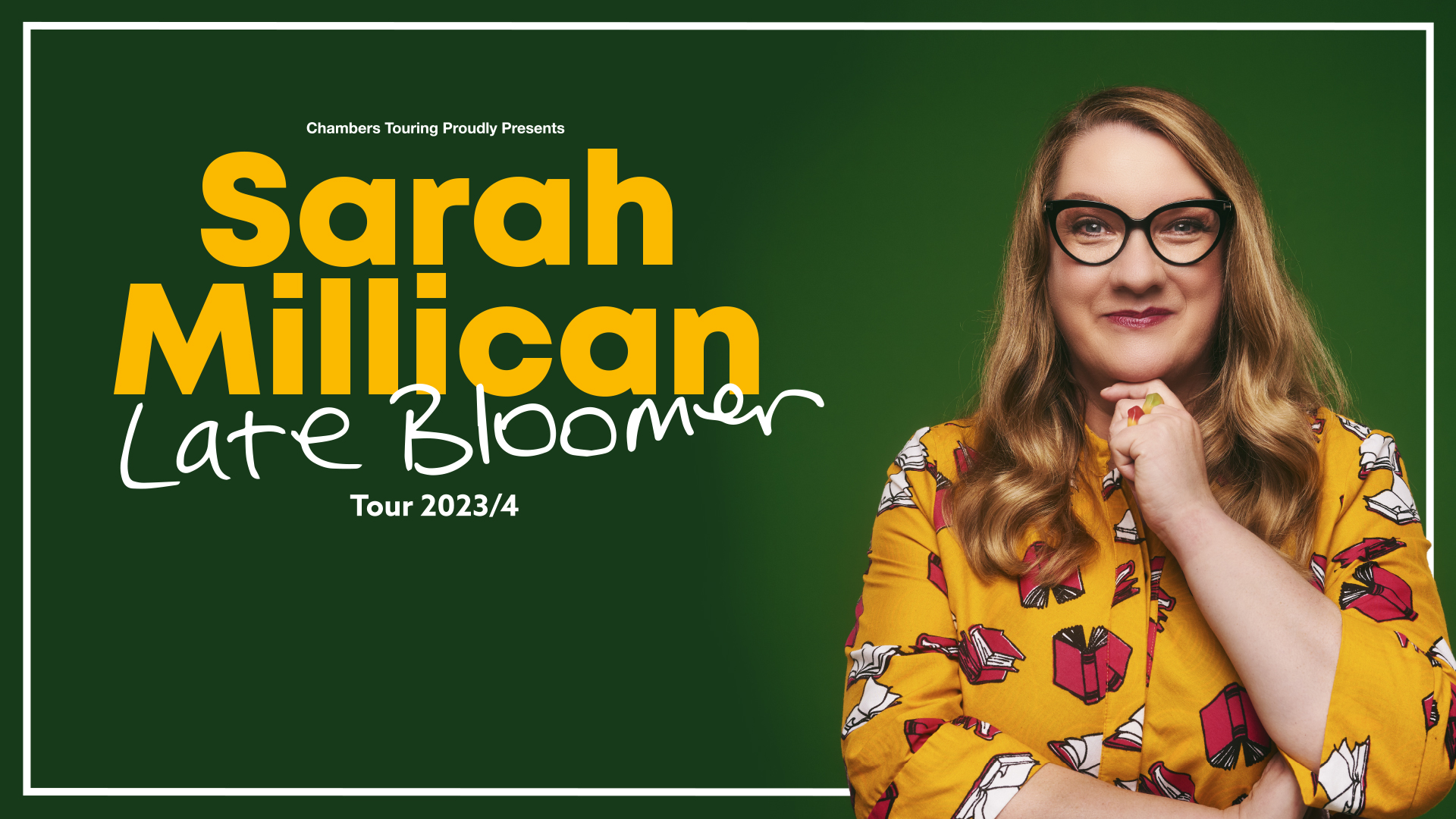 Sarah is back with her biggest tour yet, Late Bloomer. As she says, 'I love touring so much (The audiences! The backstage chats! The hotel beds! The late night chips!)'. To coincide with dates being released, we launched a brand new website pushing record numbers onto her mailing list. 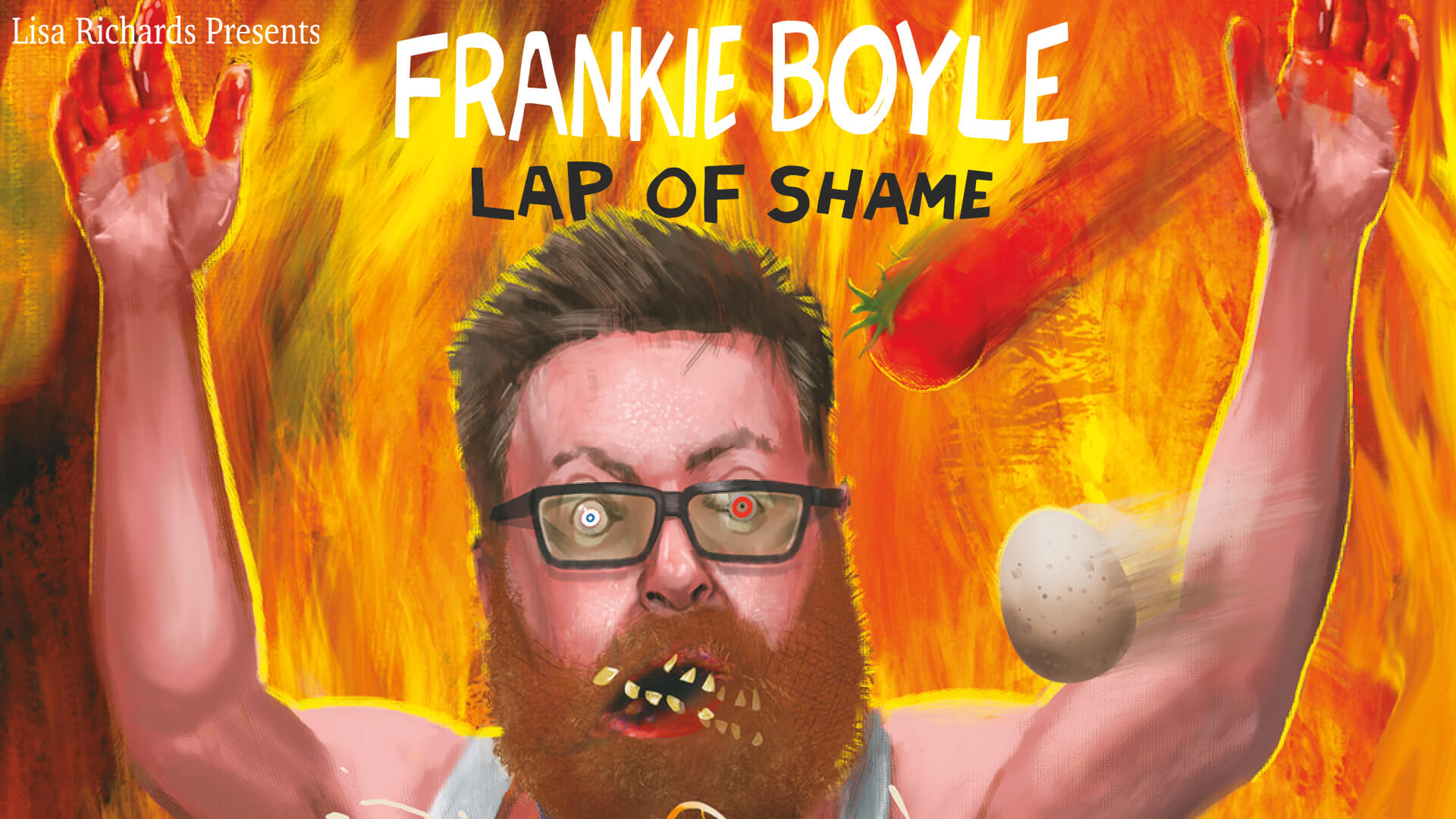 Frankie is back on tour. As Frankie says, 'Buy a ticket because by the time I arrive, the currency will be worthless, and you and your neighbours part of a struggling militia that could probably use a few laughs'. Tickets are available through his official website. 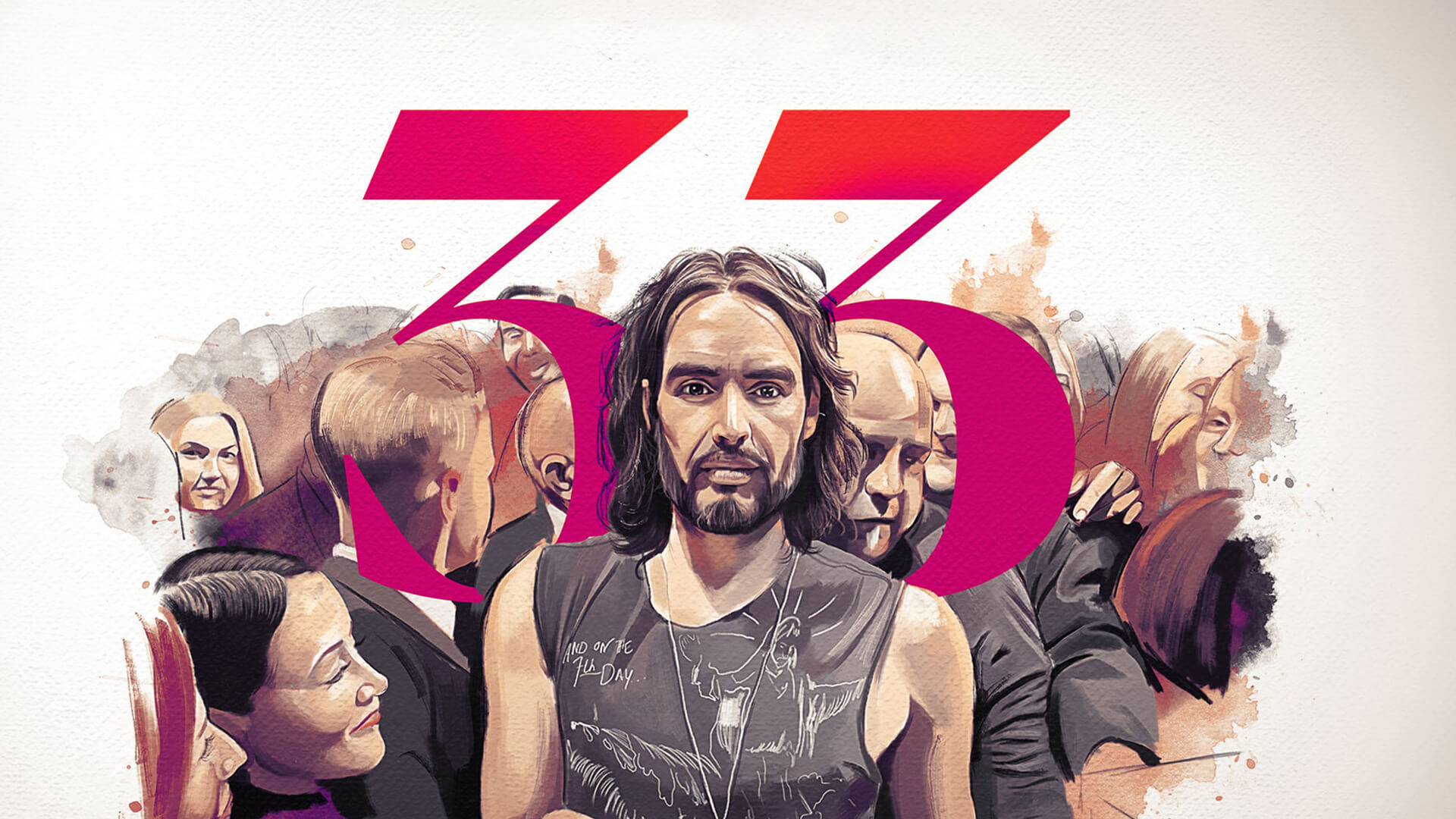 Featured Client, Live, Tours, TV, Film & Live, What We Do

Russell's latest tour, '33', is a unique and moving live experience: a mix of comedy, politics, breathwork and meditation. Audiences emerged blinking into the light, awakening beings embracing their newfound collective enlightenment. Are there any dark corners that Russell isn't prepared to irreverently shine a light into? Russell's website and mailing list formed the go-to hub for all his tour marketing. It was an honour to help audiences share Russell’s powerful live experience. 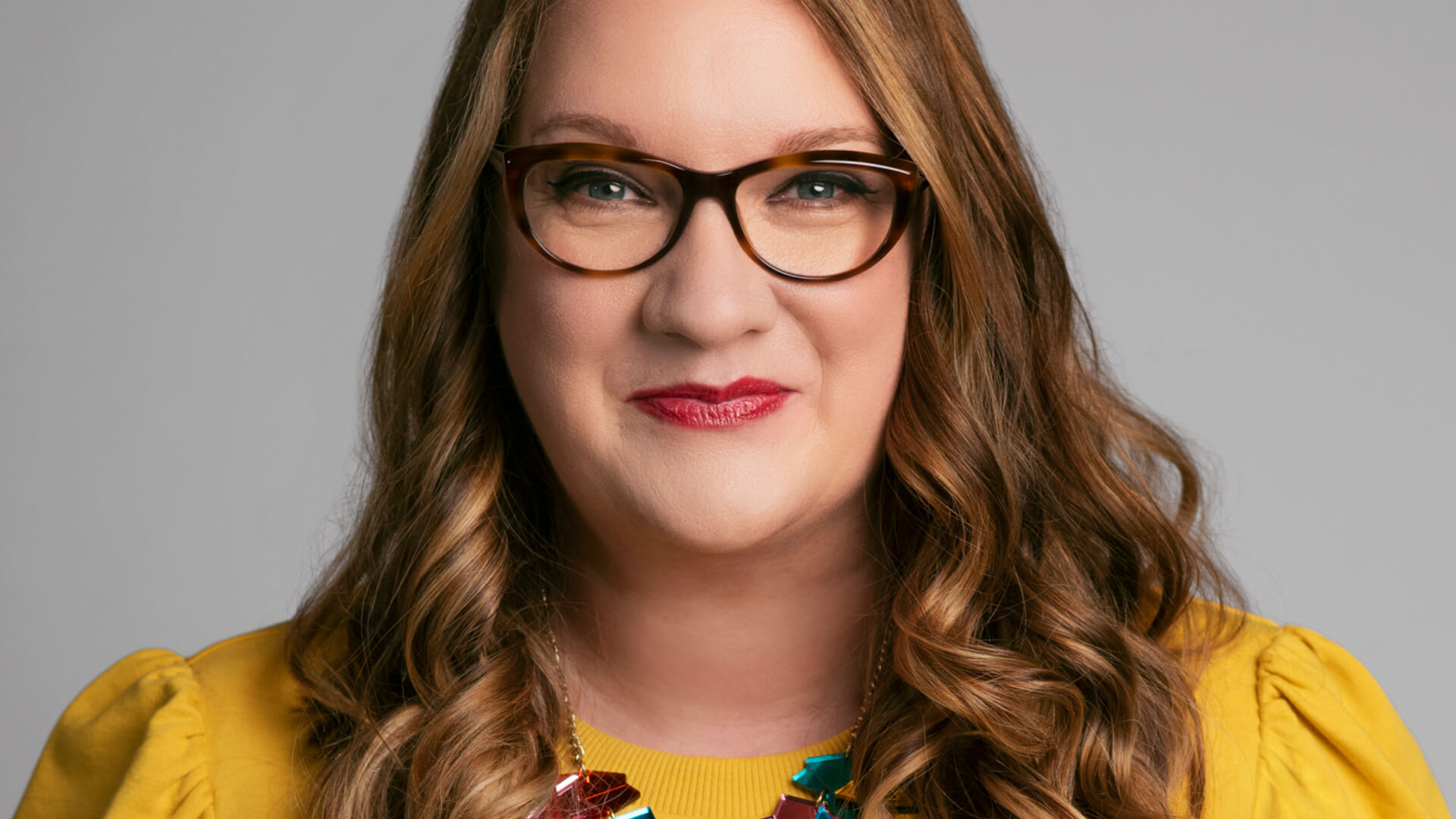 Officially, we shouldn't have favourites, but if we could, Sarah is a real Bobby Dazzler! We manage Sarah's website and social media and help grow her YouTube Channel. Sarah has entertained huge, sellout crowds on national and international tours. Her acclaimed approach to her channels is proof that social media doesn't have to be toxic. Sarah is a role model for kindness, inclusivity and tolerance. We can’t do favourites, can we? Screw it! We love you, Sarah. 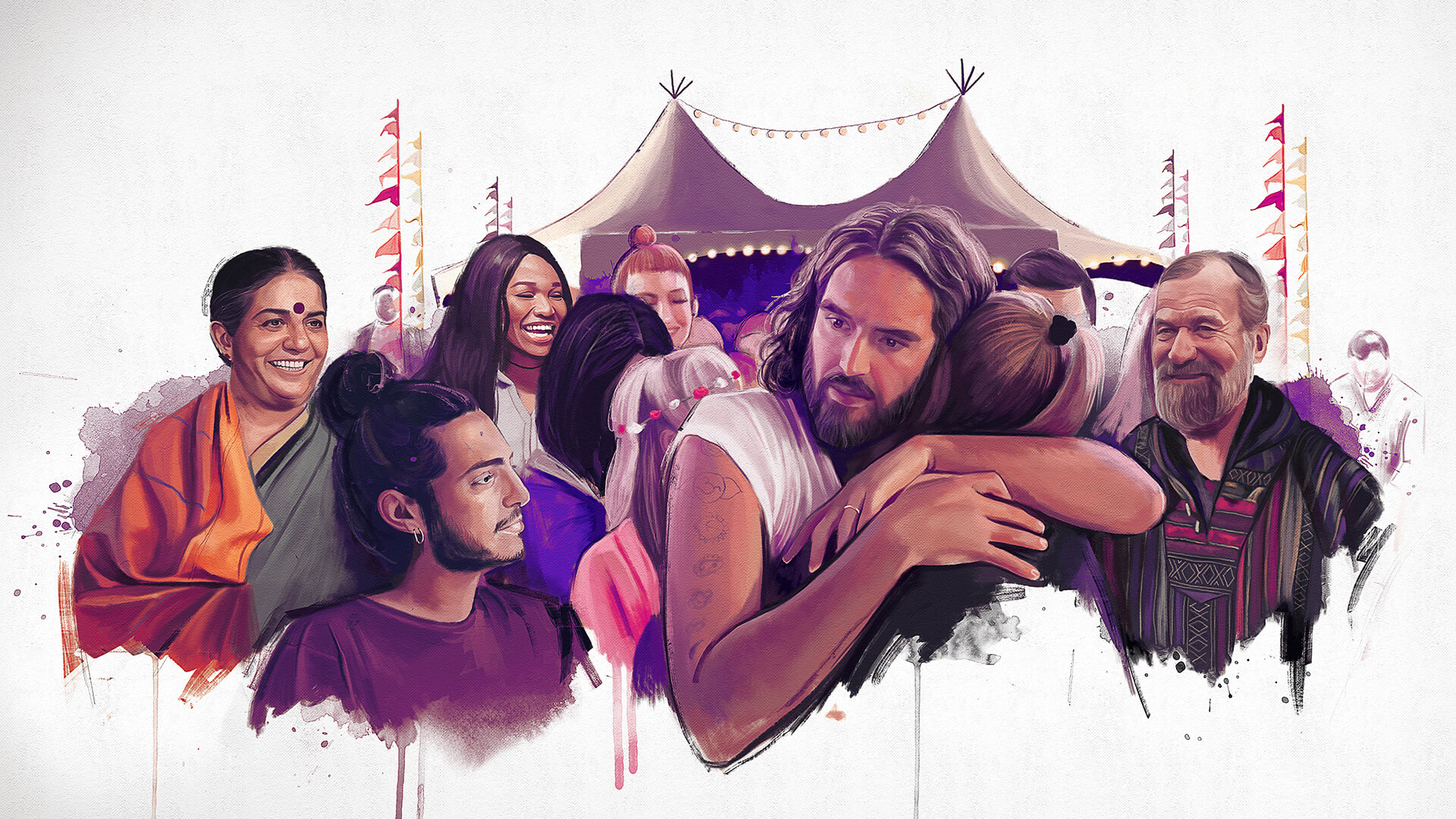 Featured Client, What We Do

Russell Brand, Wim Hof, Vandana Shiva and friends shared an intimate outdoor setting with conversations on spirituality, wellness, healthy living and our environment. Community is about personal awakening and social change. Russell aimed his substantial social following at a heavily-optimised micro-site, with the festival selling out in record time. All profits from Community went to Russell's Stay Free Foundation which proudly supports people through recovery and addiction. Russell and friends are back with Community in July 2023. Tickets can be pre-ordered now. 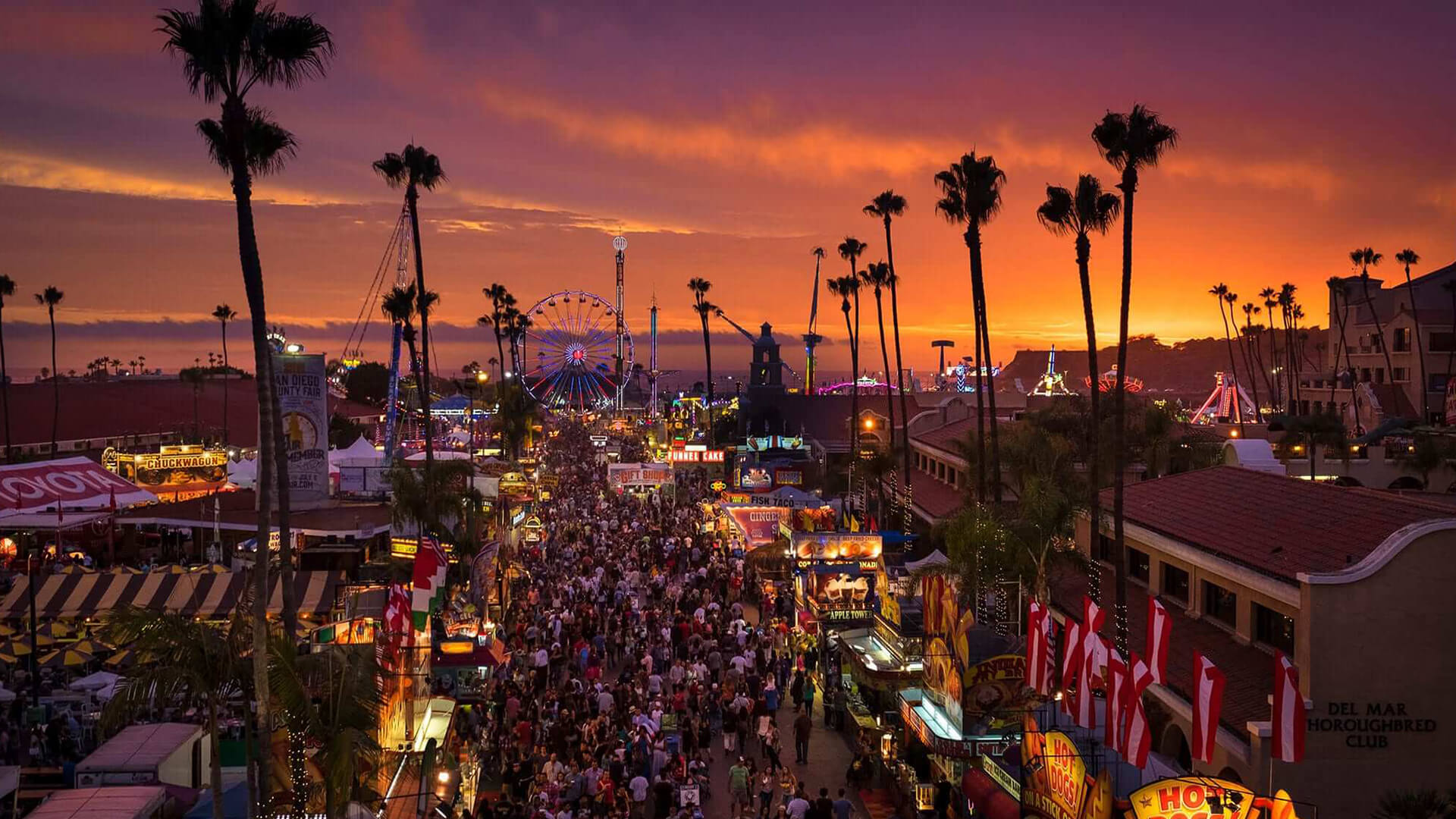 Featured Client, Live, Ongoing Support, What We Do

The San Diego County Fair is the largest in the US. Nearly three million people rattle through its turnstiles every year. It's a San Diego institution. The website is their primary promotional tool and a reference point for every visitor. The Fair approached us in 2016, looking for a WordPress development team to create a highly-flexible resource that could evolve year on year. We've been part of the gang ever since. Sadly, the pandemic saw the Fair postponed for two years. We could not have beeen happier to see San Diego heading back to the Fair in 2022. We look forward to many more fairs to come. 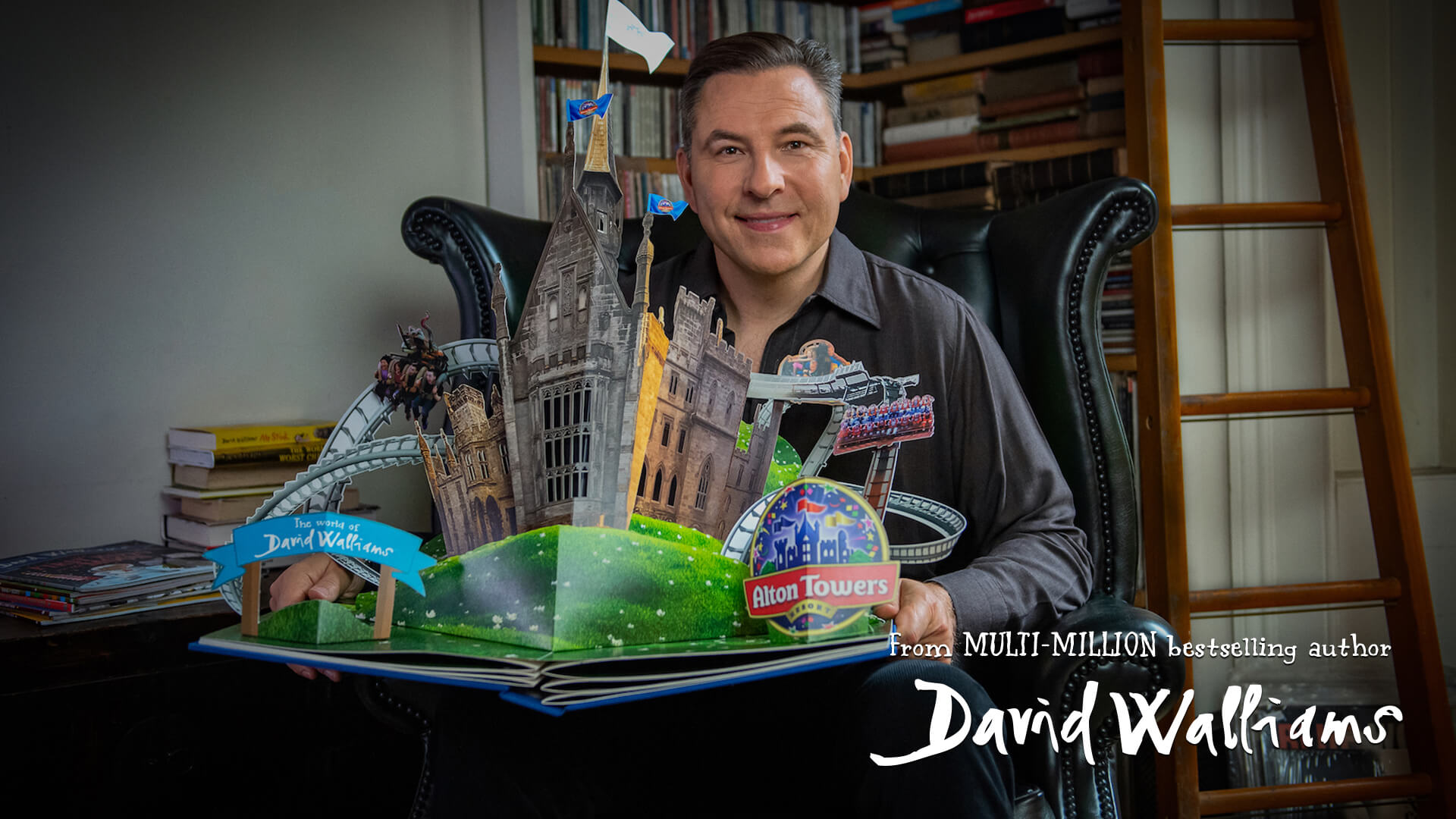 David Walliams, national treasure and best selling children's author. David turned to us for strategic and practical support with his social media and book promotion. We worked closely with him and his publisher, HarperCollins, to ensure his social media was authentic, innovative and carefully balanced for diverse promotional needs. His books continue to fuel the blossoming imagination of generations to come. 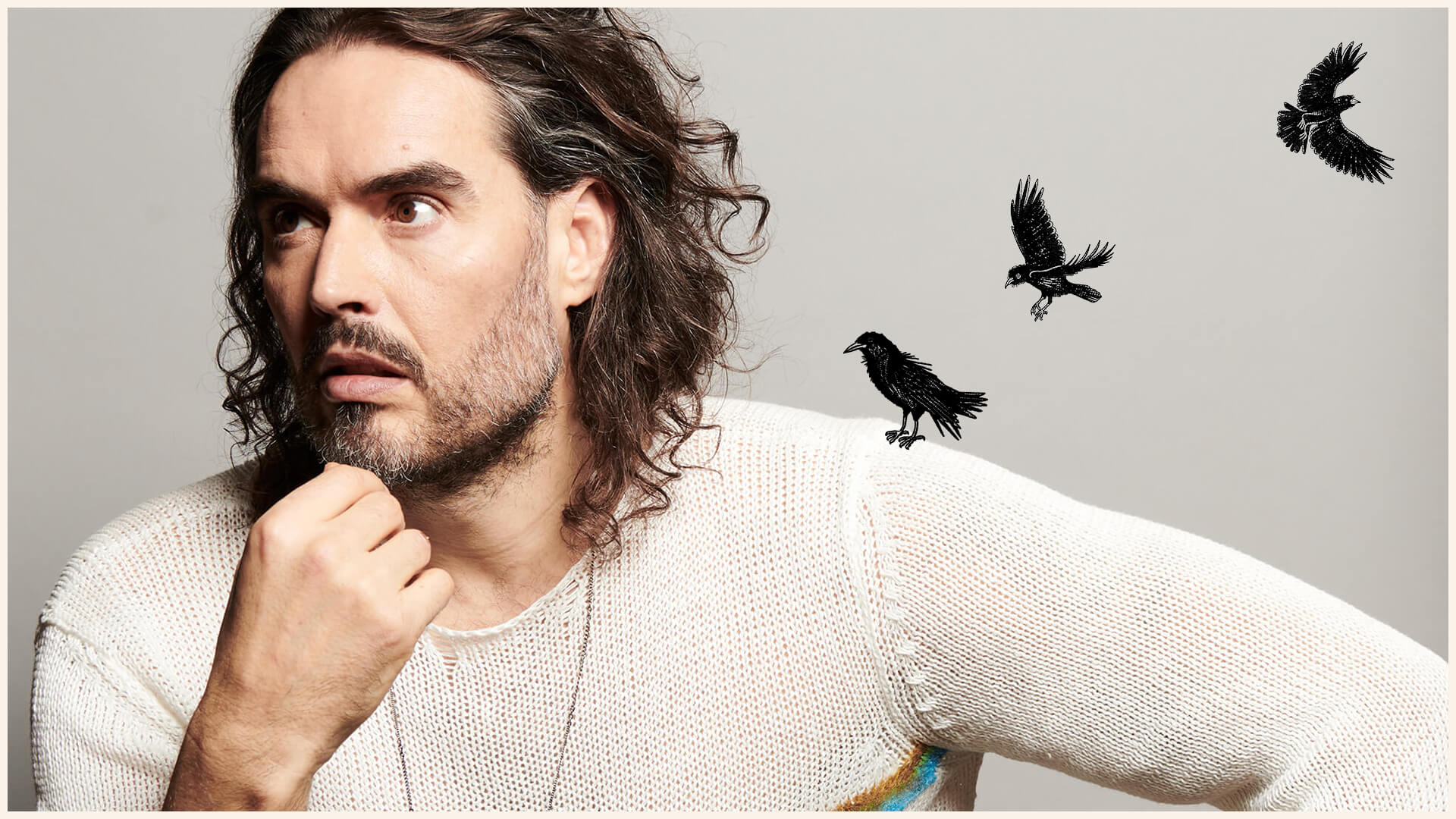 The world needs Russell. Now more than ever. He is unafraid to pose challenging questions and leads us bravely toward the light. He shines a torch into the murky world of power, misappropriation and disguised agendas. Working with Russell and his team is a voyage of discovery. We manage his website and advise on broader marketing, email and YouTube strategies. As Russell evolves, so do we all. 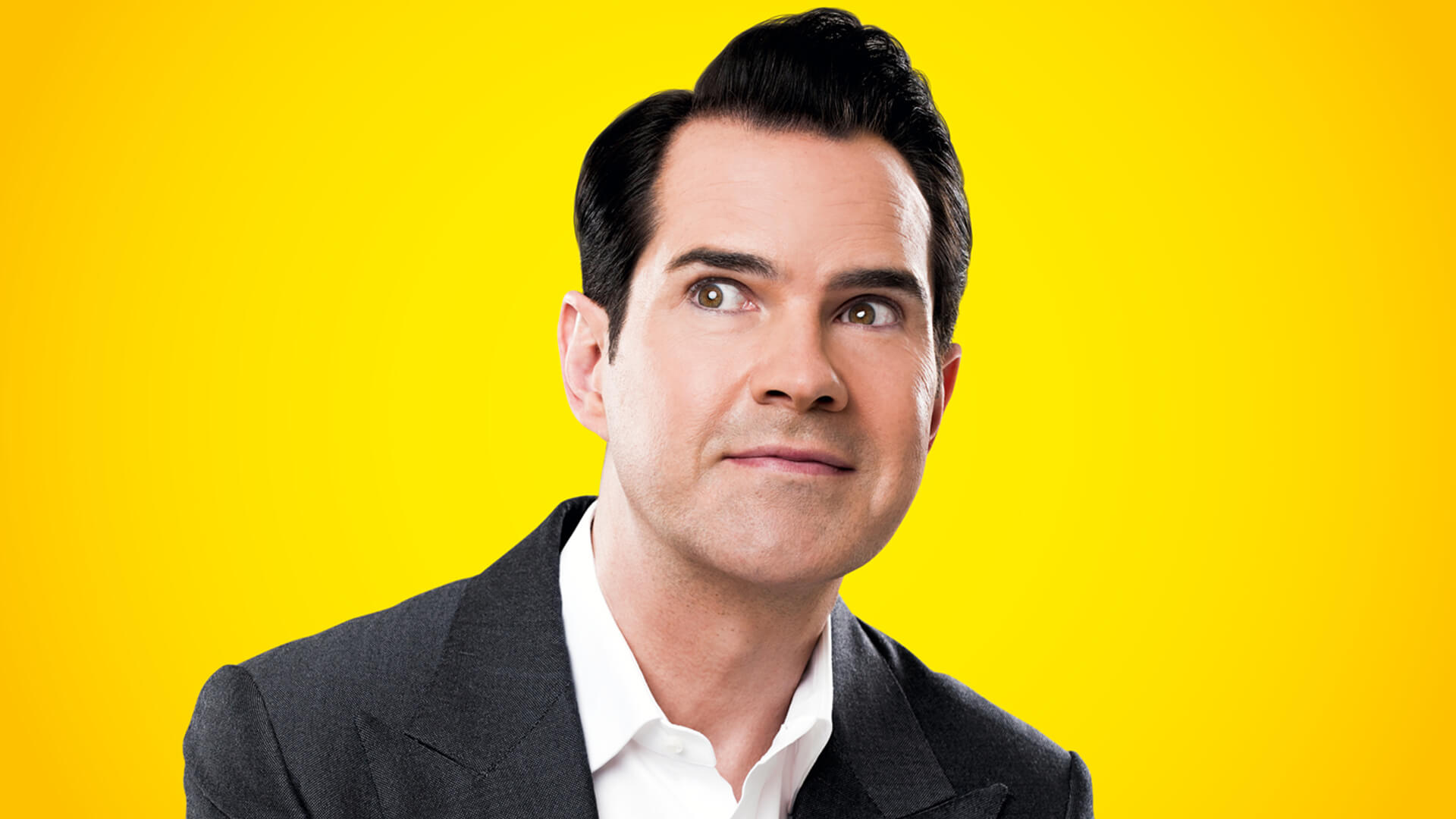 We've worked with Jimmy and his team for over a decade. We manage his website and mailing list and provide support for his social media and YouTube Channel. We've helped sell out numerous national and international tours - with an estimated ticketed audience of over 10m people. The hardest working man in comedy shows no signs of slowing down yet. 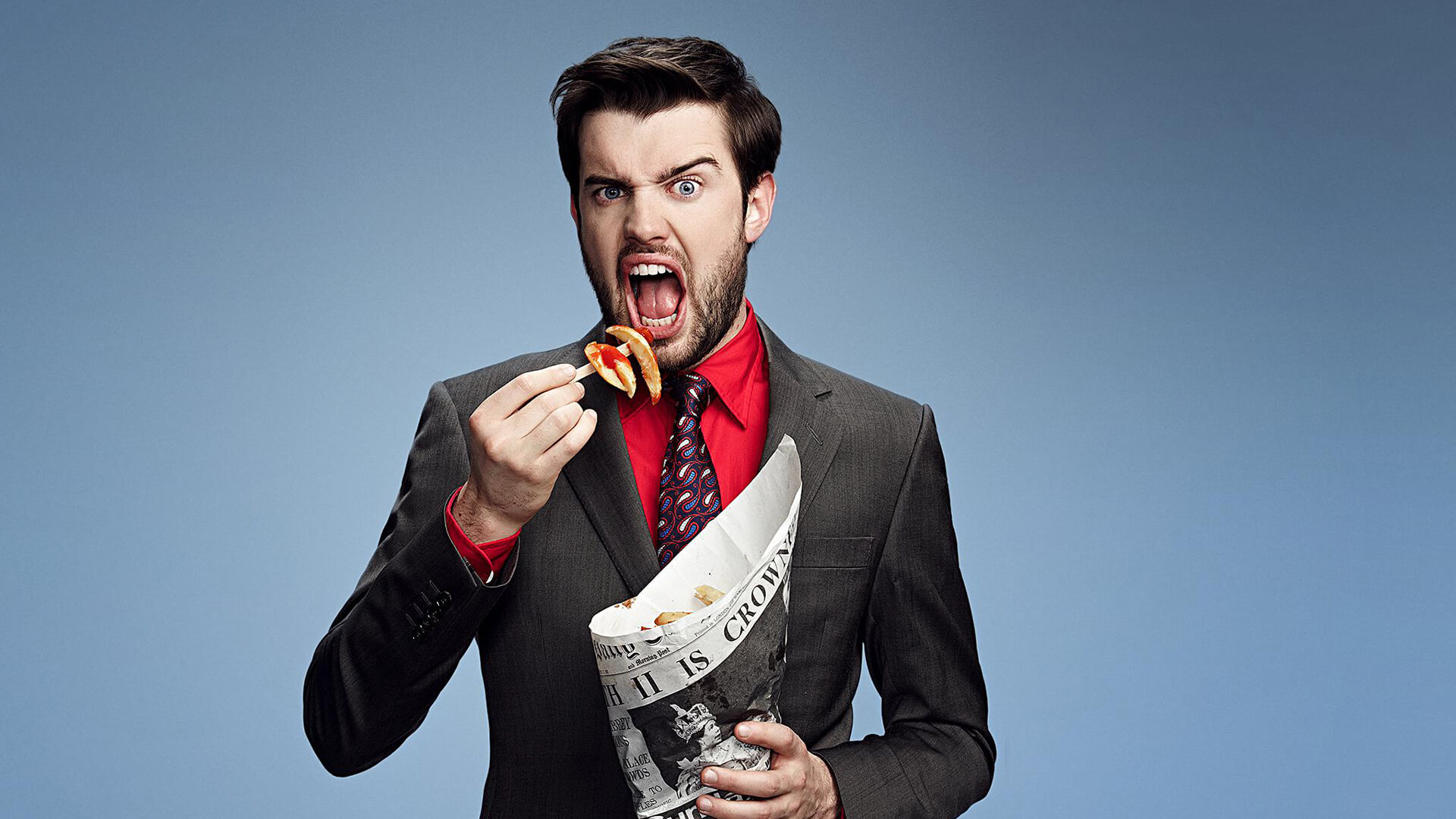 We’ve been alongside Jack since the Edinburgh Fringe Festival in 2007. Fifteen years later, three sellout Arena Tours, 3 King of Comedy Awards, 4 BRITs and over 15 million followers, Jack now stars in Disney’s Jungle Cruise, opposite Dwayne Johnson and Emily Blunt. We manage all aspects of Jack’s online presence from his website, mailing list, social media and YouTube channel. It’s been quite the ride. Thank you, Jack. 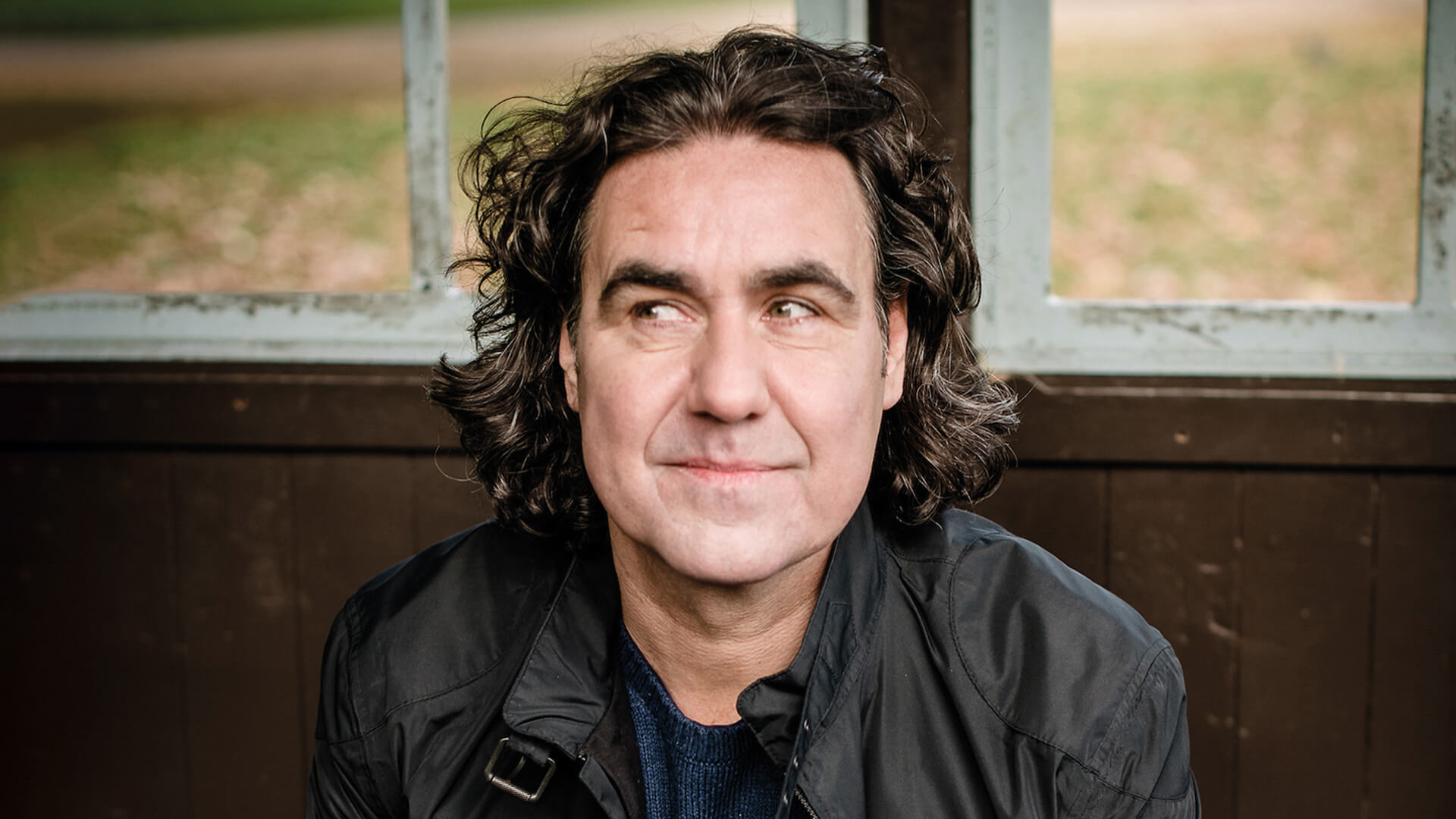 Although our team manages his website and mailing list, Micky famously doesn't do socials! Despite that, he's enjoyed three sellout Arena Tours, subsequent Live Specials and several TV Shows and is our firm favourite. We've worked with Micky and his team for over a decade. They trust us to get Micky’s message 'Out Out'. 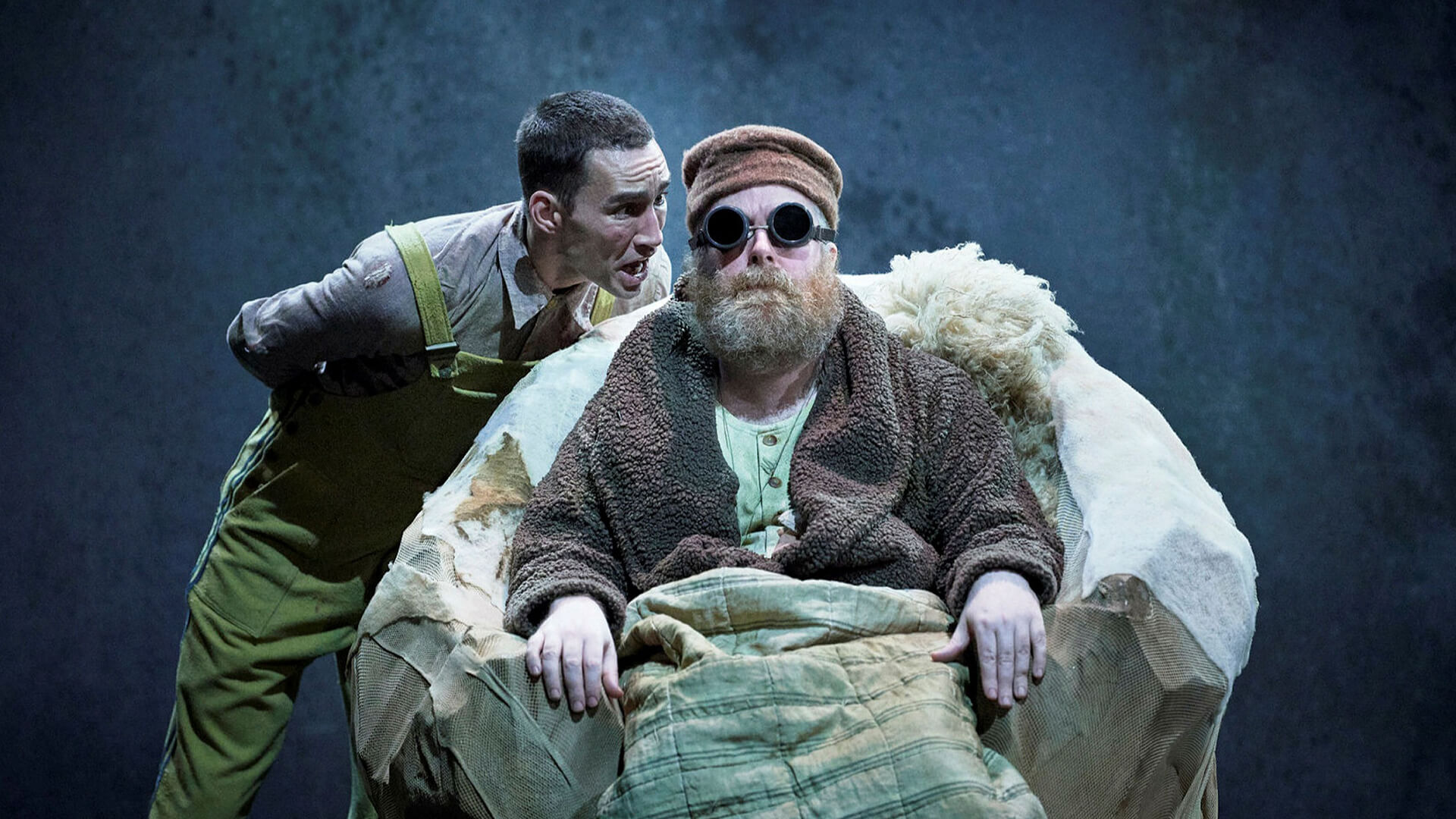 We have worked with Frankie for over ten years. The team have supported him across numerous live tours, TV shows, books and podcasts. Nobody delivers quite like Frankie. He is, and will always be, the king of the tweet. 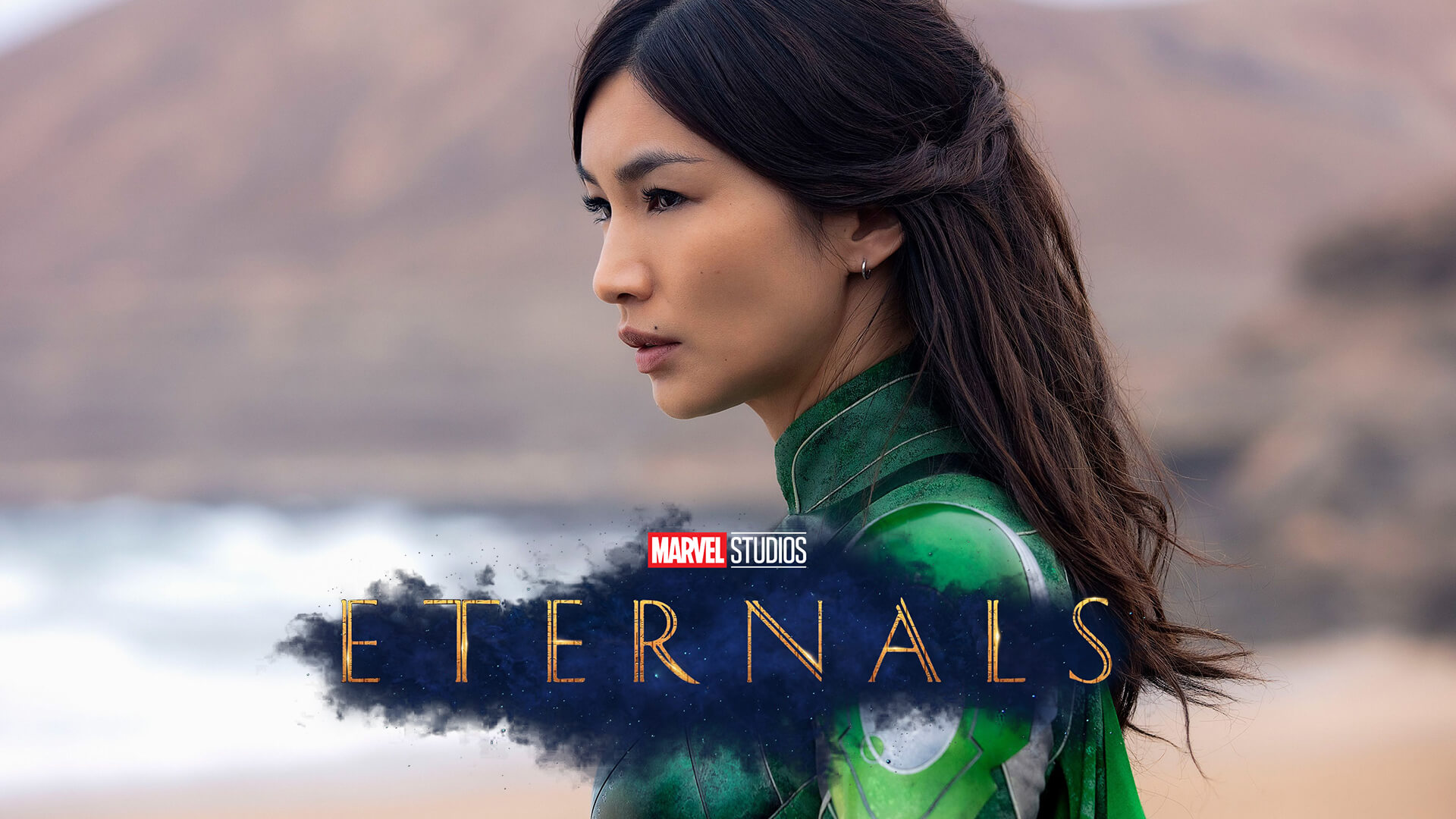 It's beautiful to have seen Gemma's meteoric rise from a mortal human into a Robot and then into the Marvel Multiverse as an Eternal. We've managed Gemma's website for over ten years. Although, Sersi has been with us for well over 7000 years! 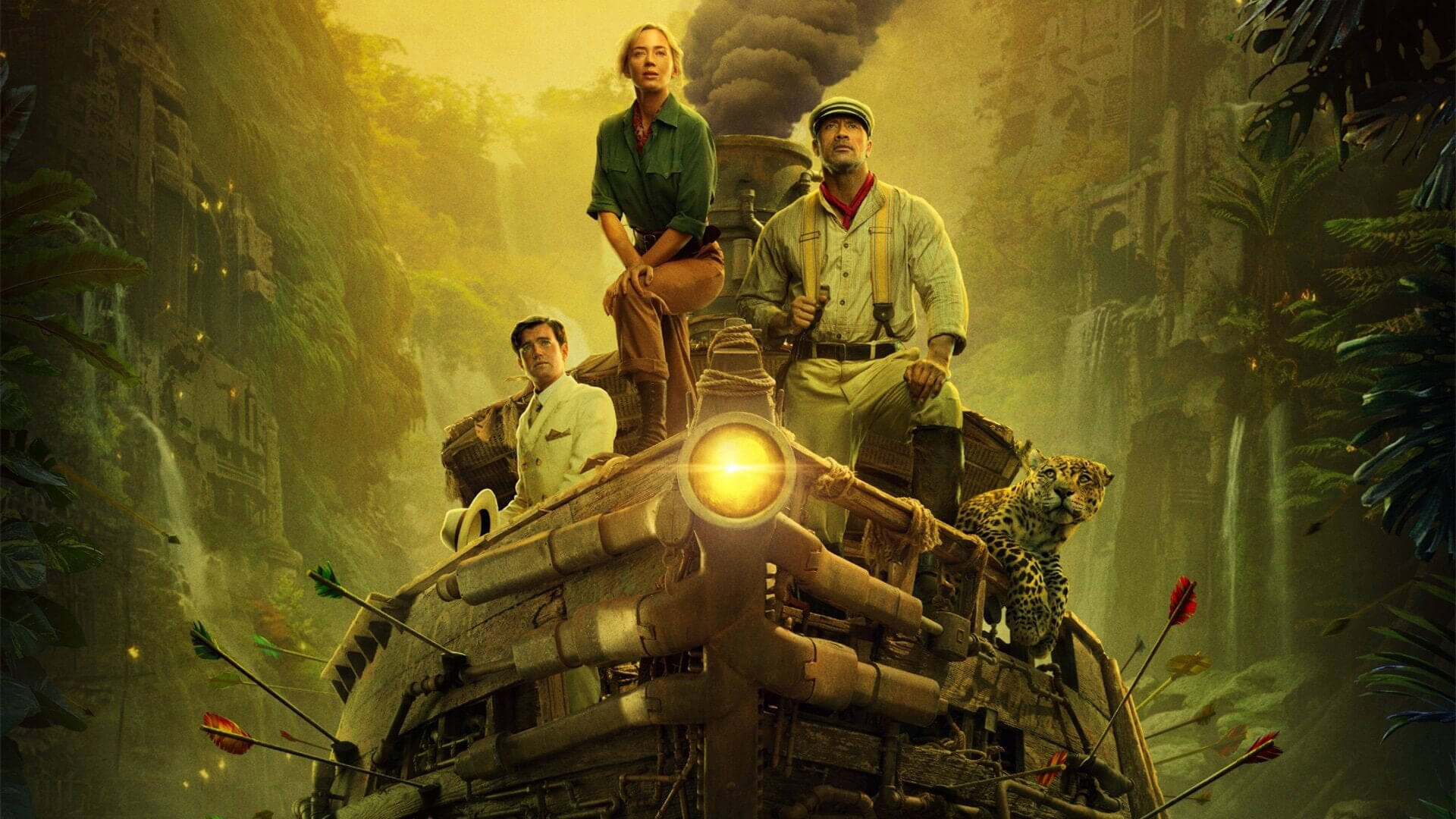 In 2007, as a fresh-faced, 17-year-old Jack Whitehall made us laugh in a portacabin at the Edinburgh Fringe, few could have predicted his meteoric rise. Fifteen years later, it's been quite the journey. We've been with him every step of the way. When Jack starred in Disney's Jungle Cruise, opposite Dwayne Johnson and Emily Blunt, it felt like the natural step in his stellar career. With the full force of Jack's social following, Emily's sprinkle of magic and the brute strength of The Rock, Jungle Cruise was a global hit and one of the first blockbusters to be released on both premier Disney plus and movie theatres. The film has grossed about $215 million worldwide, and Disney recently confirmed a sequel. 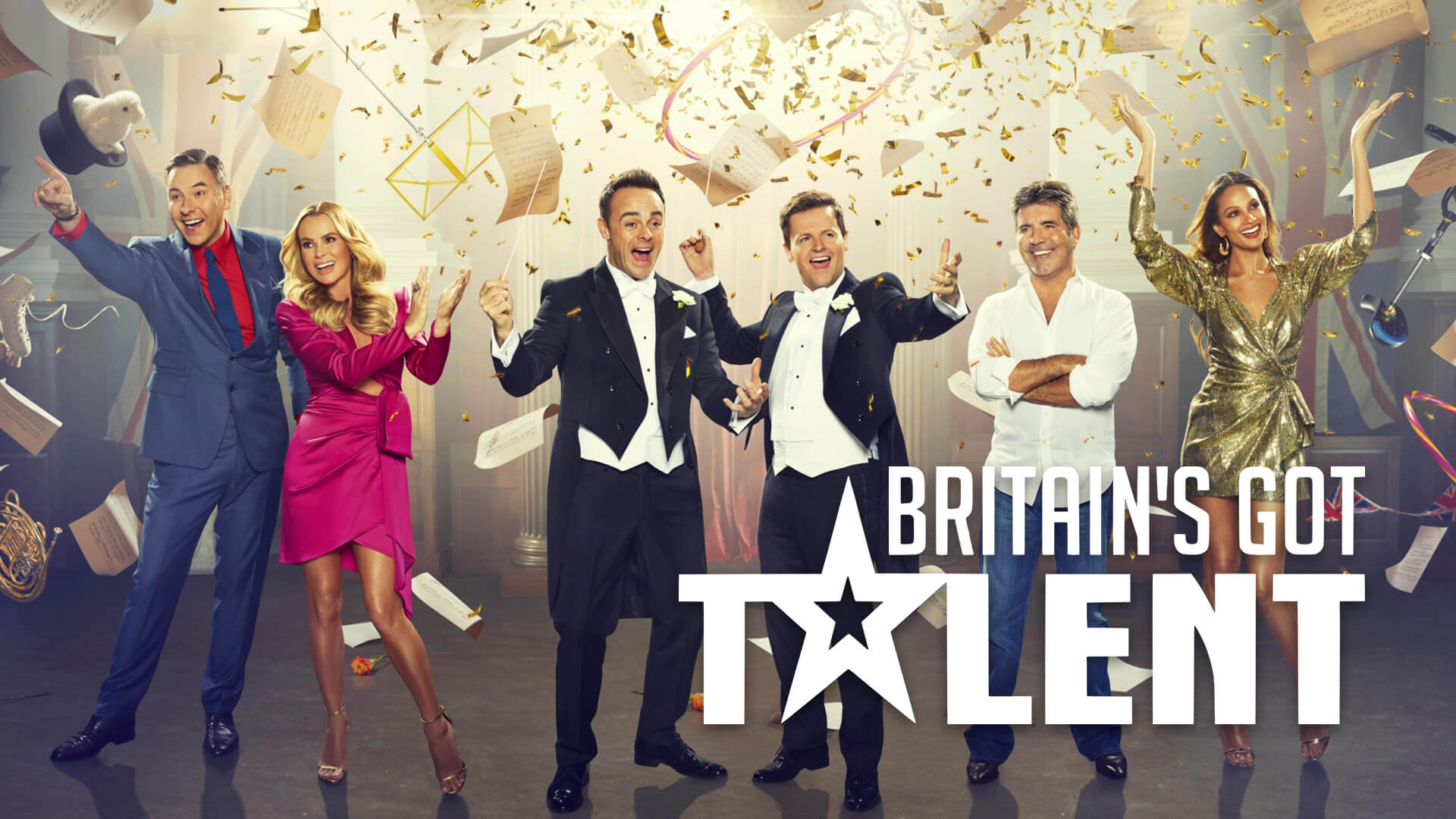 A real British institution. Britain's Got Talent has seen singers, dance troupes, impressionists, performing dogs, magicians and other variety acts audition for the judges, showcase their star quality and beat the buzzer. As David's social team, we helped him promote the show and unearth Britain's best-hidden gems. 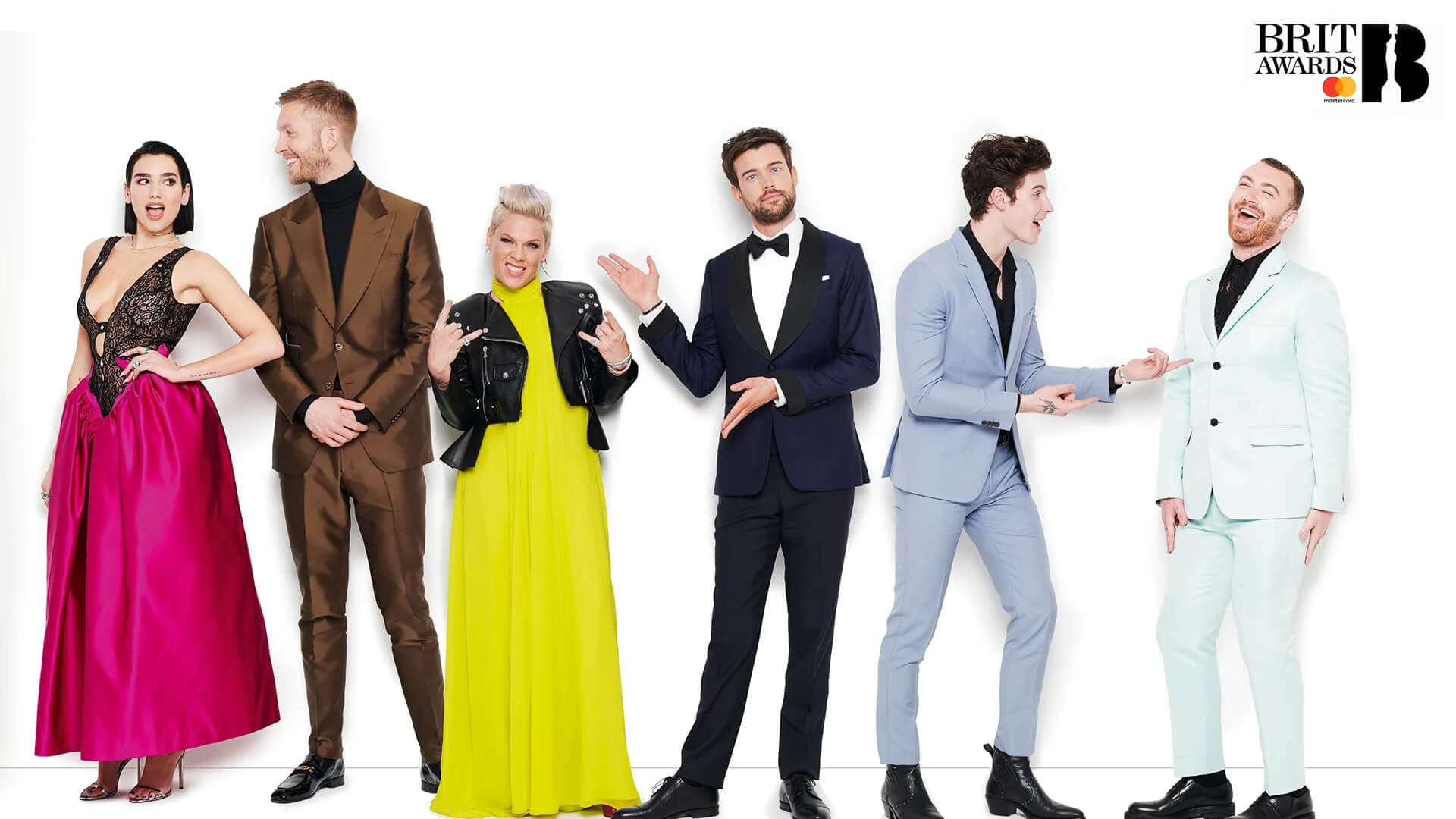 The BRITs are always so much fun - controlled chaos! Four-time host, Jack Whitehall, gave us unprecedented access to this cultural mainstay. Working closely with the BRITs' team, we ensured Jack's social media was an essential promotional tool for them across his four-year tenure as host - our time together, including some of the BRITs' most iconic moments. Man is most definitely hot! 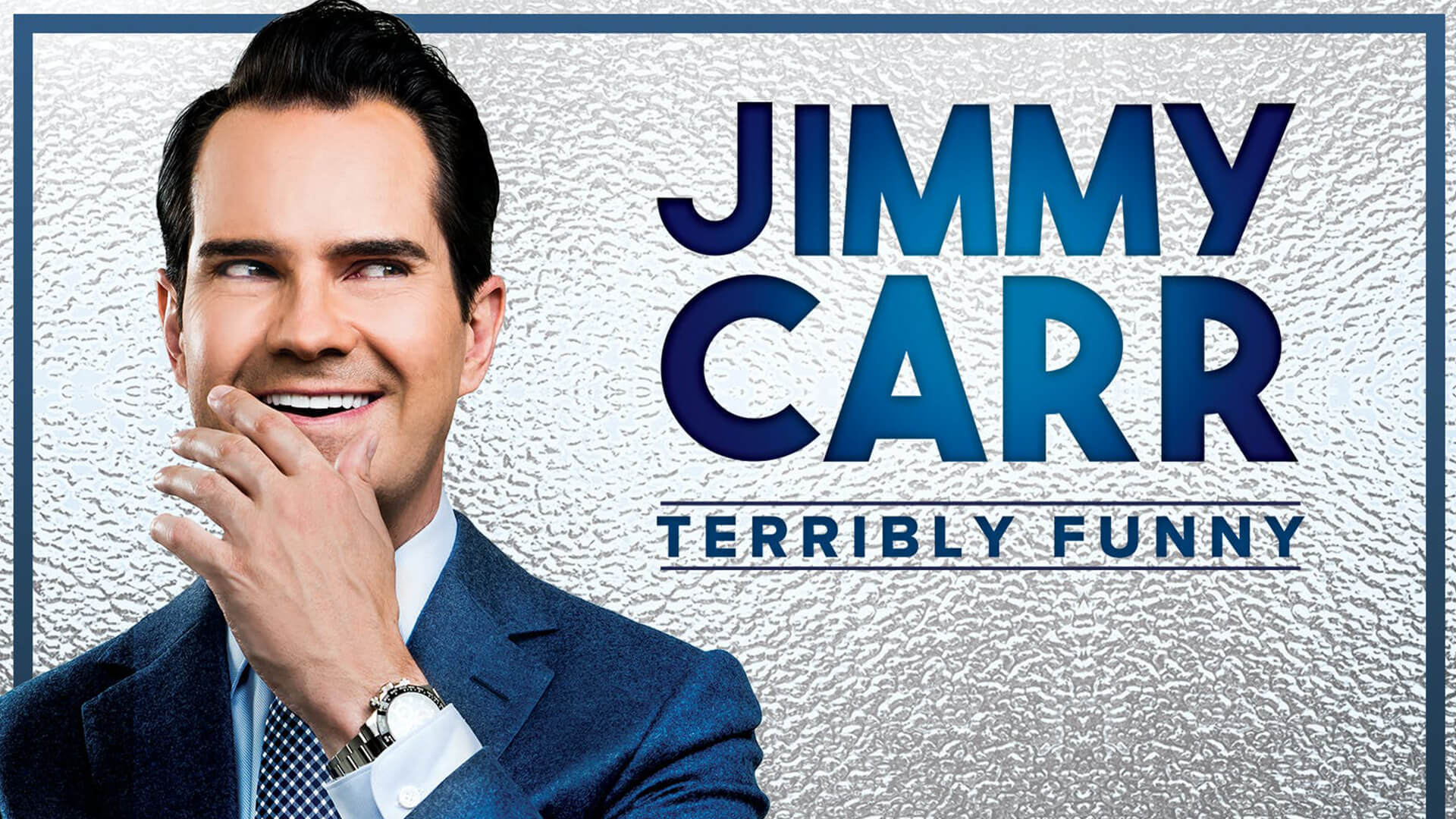 Jimmy's most recent tour, Terribly Funny 2.0, is yet another sellout success - with over 350 national and international dates! We've worked with Jimmy and his team for over a decade. We manage his website, mailing list, and social media and support his YouTube Channel. Terrible Funny is the 6th tour we've marketed for him. The hardest working man in comedy shows no signs of slowing down yet.

Jack Whitehall: Travels With My Father

When Jack suggested he and his father, Michael, take unusual and amusing trips to foreign lands to strengthen their bond, we wondered if both would return! Born of Michael's distaste for exotic holidays and fresh off the back of their success with Backchat, Jack and Michael's travels now stretch across four hilarious and heart-warming Netflix seasons. We manage both their social profiles taking their playful, often fractious, relationship online. All four series appeared in Netflix's Top 10 Hits, and, amazingly, both are still in one piece, as is Winston - who now has his cult following - much to Jack's annoyance!

Sarah's recent tour Bobby Dazzler was a national and international sellout. Sarah's website, social media and YouTube Channel ensured every bum was on every seat. Bobby Dazzler has a special place in our hearts. Throughout 2020 and 2021, Sarah put on 53 weekly virtual comedy nights: Playground. Our team quietly ensured the backstage technical aspects ran smoothly. Playground became an invaluable space for Sarah to try out new material and a vital support system for comics during Lockdown. Bobby Dazzler went from the living room to international acclaim. 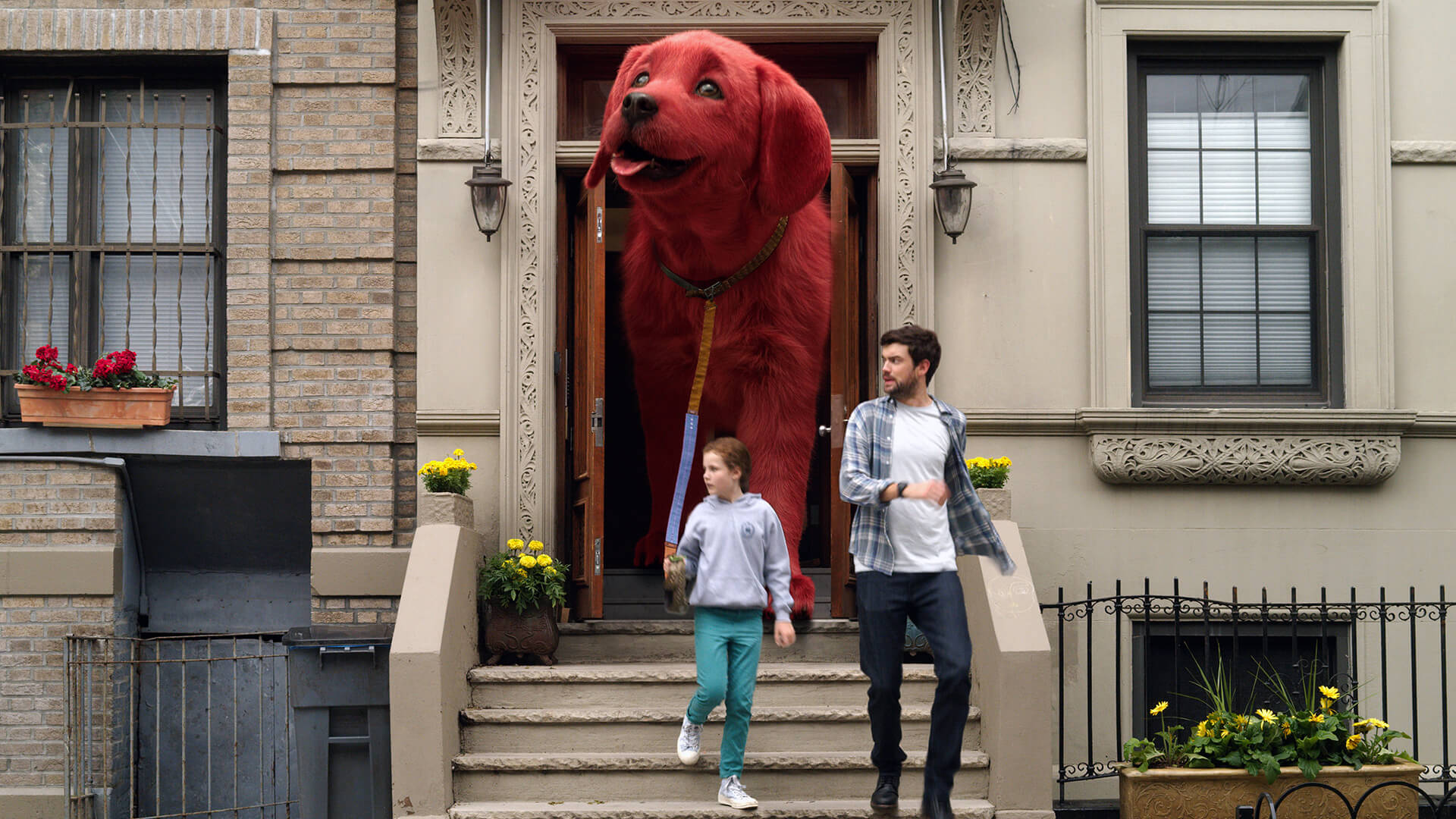 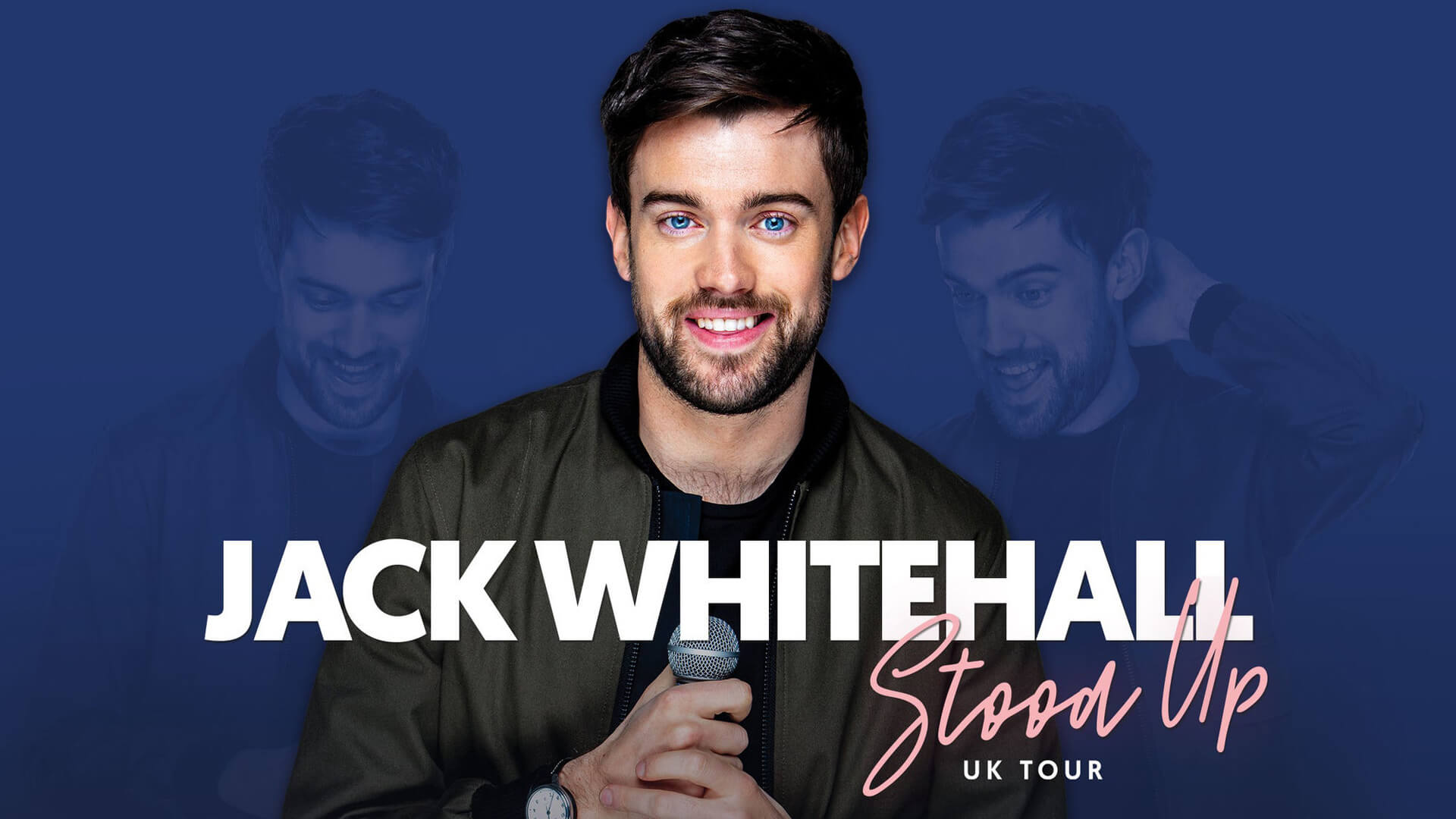 Featured Client, Live, Tours, TV, Film & Live, What We Do

Jack's sellout arena tour 'Stood Up' was his biggest live show. Jack played to an estimated UK audience of over 750,000 before taking the show to Australia, New Zealand and Dubai. As with everything Jack does, we are involved in all aspects. From tour branding and content creation to the overall digital marketing strategy. Our team was his team. The innovative practices we implemented to ensure every seat in the house was full became our gold standard. Stood Up is the model we now use to market every live tour we help promote. We look forward to the next one, Jack.

See You All Soon
Learn More 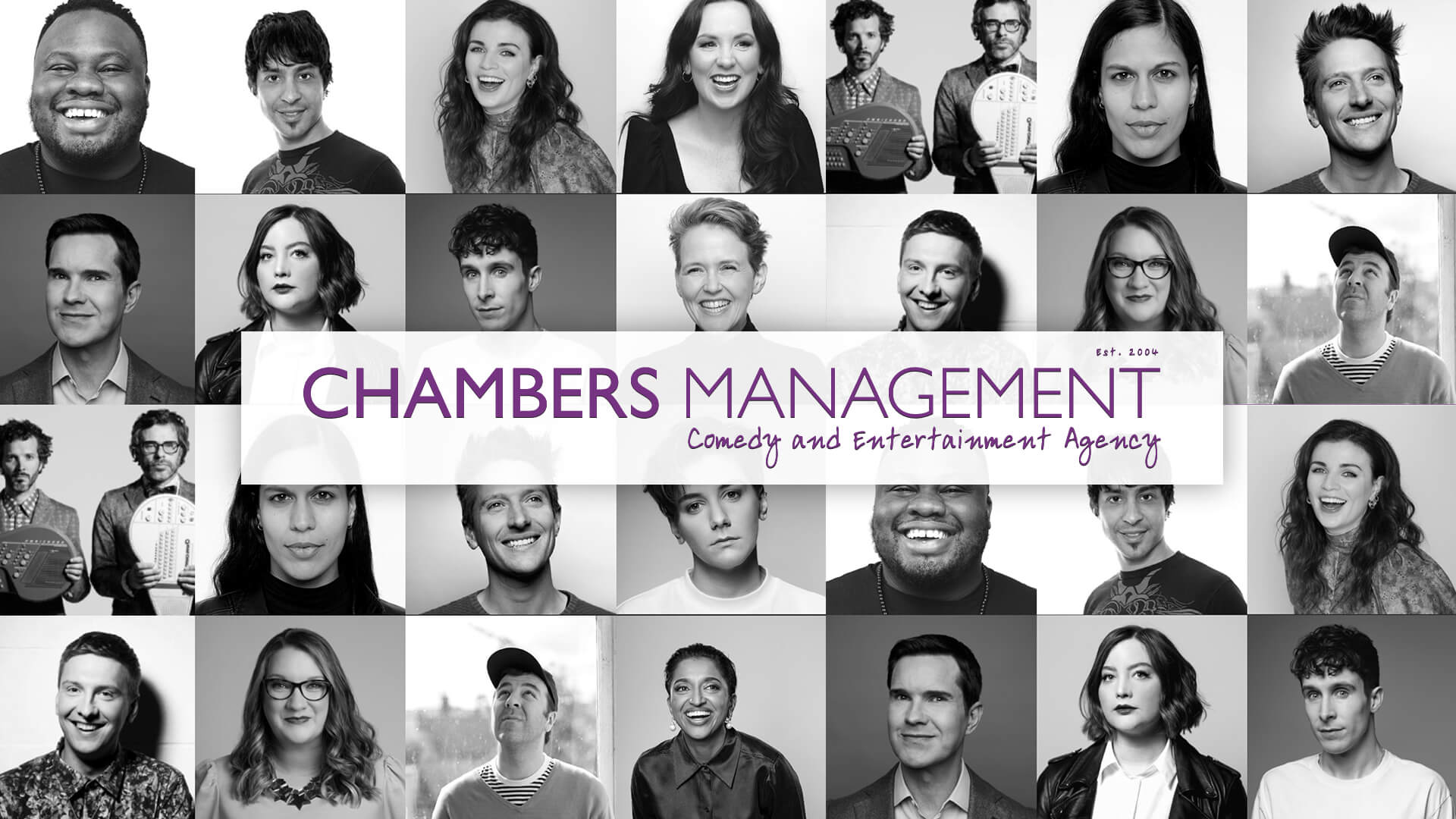 Chambers Management develop the best talent in the comedy. For almost 15 years, we've worked alongside Hannah, her team and their roster of rising stars and household names. Hannah gave us our big break. We, in turn, ensure both the agency and its clients are always well-positioned online. Hannah, and the team, it's been a rollercoaster and an absolute honour. 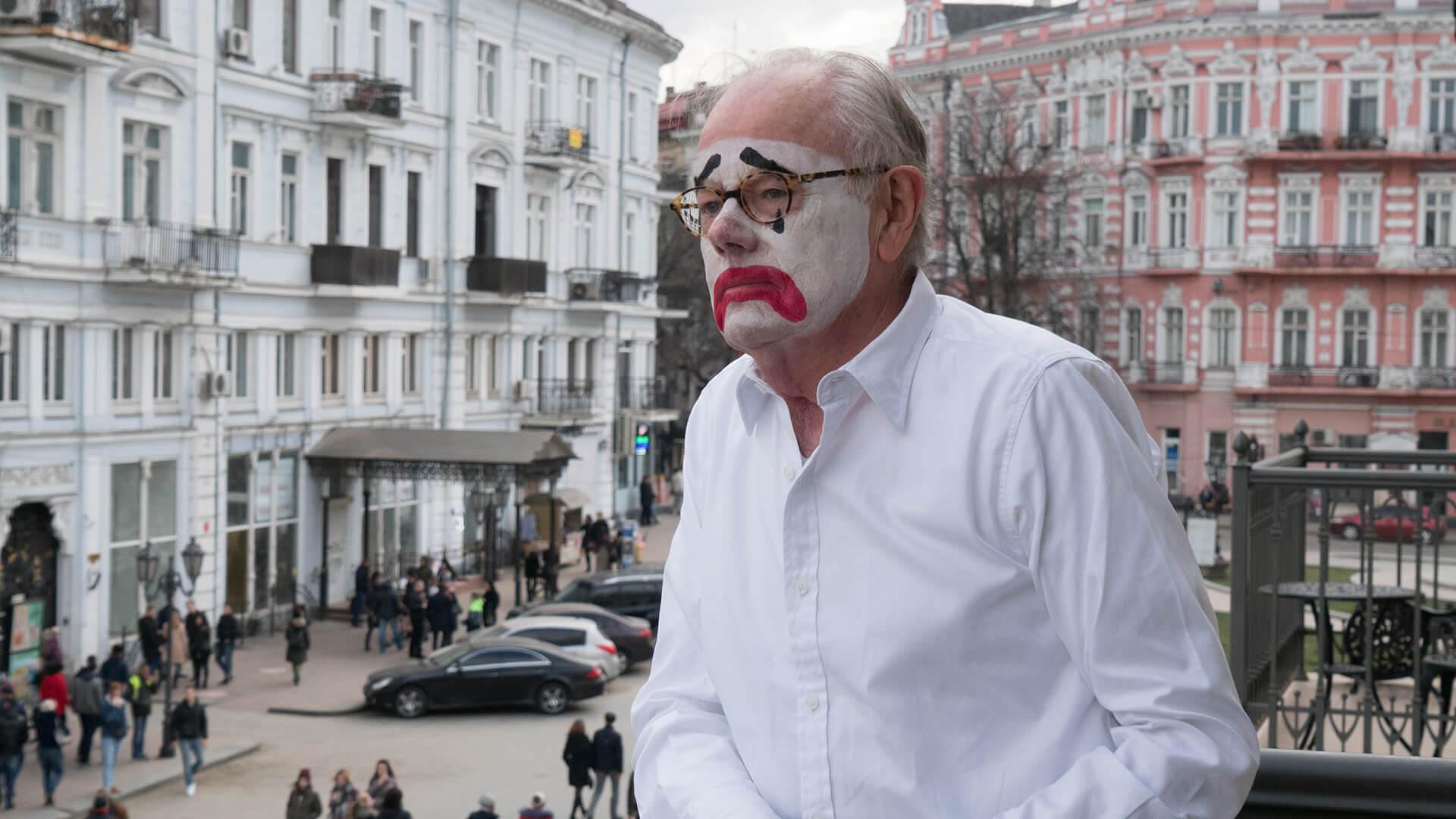 What else is there to say about Jack's dear dad, Michael? Retired agent to the stars. Jack's straight guy on their infamous trips across the globe. Daddy. Michael's second career has been just as successful as his first. We manage all aspects of Michael's social media. Perhaps, he put it best: 'This isn't as boring as I had expected it to be….'

That’s just half the story… now, let’s talk about you

‘Without you, I’d just be shouting into an empty room!’

Like what you see? Feel like your social media doesn't quite deliver? That the spotlight's not on you? Let's put you in charge again.

Like what you see? Feel like your social media doesn't quite deliver? That the spotlight's not on you? Let's put you in charge again.

We turn followers into engaged audiences, viewers, sales and bums on seats.
#ResultSilenceBullshit

Page load link
We only use the cookies we don't eat. Whatever!
Go to Top